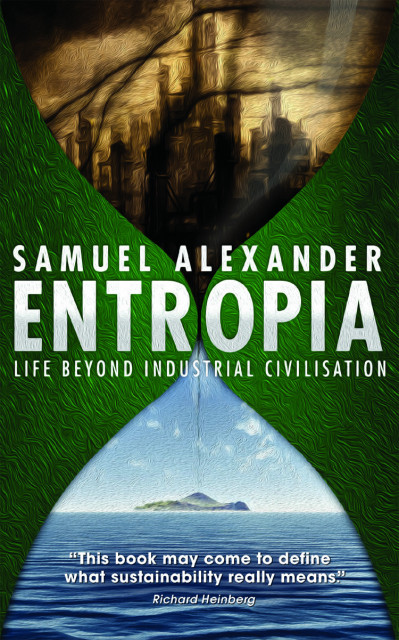 When industrial civilisation collapsed in the third decade of the 21st century, a community living on a small island in the South Pacific Ocean found itself permanently isolated from the rest of the world. With no option but to build a self-sufficient economy with very limited energy supplies, this community set about creating a simpler way of life that could flourish into the deep future. Determined above all else to transcend the materialistic values of the Old World, they made a commitment to live materially simple lives, convinced that this was the surest path to genuine freedom, peace, and sustainable prosperity. Seven decades later, in the year 2099, this book describes the results of their remarkable living experiment.

“Entropia is a masterful work of the imagination that envisions a world beyond growth and consumerism. This is no escapist fantasy, however, but rather a practical and inspiring reminder of what we humans are capable of – and a wake up call to action. It is a literary manifesto that will inspire, challenge, and give hope.”

“Looking back from the future, this visionary book describes the emergence of a culture and economy based on material sufficiency. In doing so it provides one of the most detailed descriptions we have of an ecologically sane way of life. Overflowing with insight and beautifully written, Entropia unveils the radical implications of moving beyond fossil fuels. This book may come to define what ‘sustainability’ really means.”

Richard Heinberg, The End of Growth

“Utopian novels usually outline a world of material abundance, in which technology has reduced labour to a minimum and where everyone is rich. But Samuel Alexander, following the tradition of Henry Thoreau and William Morris, has written a ‘utopia of sufficiency’, in which a simple living community of poet-farmers rebuild their society after the collapse of civilisation. Entropia is both confronting and inspiring, giving us an insight into the possibility of a much saner and more satisfying world.”

Ted Trainer, Transition to a Sustainable and Just World

“One of the more intriguing attempts to date to imagine a viable future on the far side of our civilisation’s decline and fall, Samuel Alexander’s, Entropia, borrows the language of Utopian literature to present alternative visions of politics, society, and spirituality in the aftermath of the industrial age.”