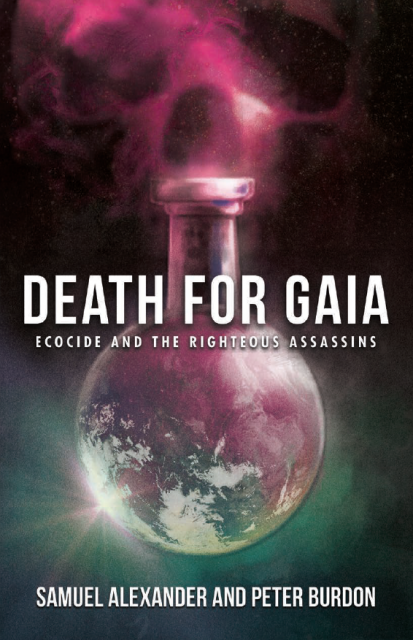 Death for Gaia: Ecocide and the Righteous Assassins

Death for Gaia is a philosophical story about a group of scientists who create and release a biological weapon they call ‘Hemlock-42’. This virus is designed with a single goal in mind: to eradicate most of humanity as a means of preserving what remains of planetary ecosystems and the declining diversity of species. Less than ten percent of humanity survives the pandemic.

Forty-six years after this momentous disruption, various tribes of the After World have gathered, in this period of fragile but renewed stability, to discuss the justifiability of the acts that led to the Great Die-Off. Professor Durruk Senjen, the sole surviving activist who released Hemlock-42, has been called to defend his acts and face judgement.

Note from the authors: Readers may draw parallels between the fictional virus described in this book and the outbreak of COVID-19 at the beginning of 2020. Our manuscript was complete and under review in July 2019 and thus any similarities are purely coincidental. We offer this book with condolences to those who have lost loved ones to the pandemic.

Samuel Alexander is a lecturer with the Office for Environmental Programs and Research Fellow with the Melbourne Sustainable Society Institute, University of Melbourne.