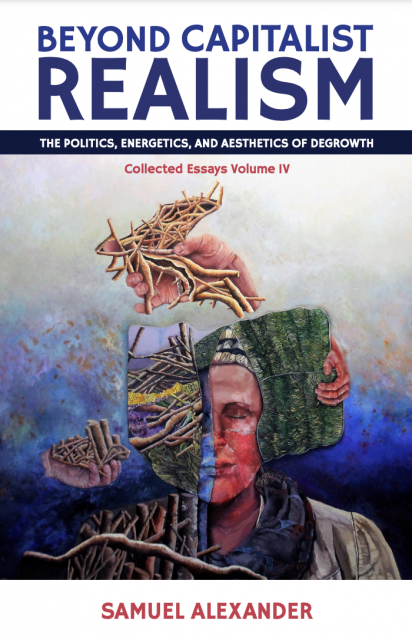 The Politics, Energetics, and Aesthetics of Degrowth

‘Capitalist realism’ implies that, ever since the fall of Soviet communism in 1989, capitalism has been the only realistic system of production and distribution. Everything else is generally dismissed as ‘utopianism’ or just naïve dreaming. This perspective points to a worrying failure of imagination, suggesting that it is now easier to imagine the end of the world than the end of capitalism.

But here is the paradox of capitalist realism: just as the dominant cultural imagination has contracted into a single vision of what is possible, the existing system shows itself to be in the process of self-destructing, serving neither people nor planet. Whether by design or disaster, the future will be post-capitalist.

In his fourth book of collected essays, degrowth scholar and activist Samuel Alexander seeks to transcend capitalist realism. He shows that viable and desirable alternatives are being lived into existence today by diverse but connected social movements. Calling for a ‘degrowth’ transition of planned economic contraction, Alexander examines and develops this emerging paradigm from various political, energetic, and aesthetic perspectives. Readers will come away seeing plausible pathways to prosperity, sustainability, and resilience that do not rely on the capitalist growth model of progress.

Samuel Alexander is a lecturer with the Office for Environmental Programs and researcher at the Melbourne Sustainable Society Institute, University of Melbourne. His interdisciplinary work focuses primarily on degrowth, voluntary simplicity, and the socio-economic implications of renewable energy transitions. He is author of nineteen books, including Entropia: Life Beyond Industrial Civilisation (2013); Prosperous Descent: Crisis as Opportunity in an Age of Limits (2015), Sufficiency Economy: Enough, for Everyone, Forever (2015), Wild Democracy: Degrowth, Permaculture, and the Simpler Way (2017).